Fantastic Contraption was originally a building game made way back in 2008. Millions of people played it obsessively and saved over 12 million contraptions. You can still play it for free. For years we loved the idea of a 3d Fantastic Contraption but couldn't figure out how it would work. Then we tried the Vive.

The new Fantastic Contraption has been designed from the ground up for room-scale VR. Imagine walking around a grassy island in the sky while you build a machine the size of a horse with your own hands. Press play and watch it trundle off to reach the goal on the other side of the island. With 40+ levels and infinite solutions, it's a VR experience you and your friends will play for hours.

Fantastic Contraption was a launch title bundled with the HTC Vive and is also available for Oculus Touch and PS VR. Download screenshots and more at our presskit or contact us at FantasticContraption@gmail.com.

The wheel moves your contraption and brings it to life

The stick attaches everything together

A water stick can move through other objects

Bring the orb to the goal area in each level

Commercial licenses (eg for arcades) available via Steam's "Cyber Cafe" Site Licensing Program for $20/month/seat, or in a discounted VR bundle with 8 games. (how to sign up)

Adobe has announced they’ll stop updating the Flash player on December 31, 2020. At that time, the original Fantastic Contraption will cease to be playable in most browsers. We’ve got new projects on the go but didn’t want to let our very first game disappear when Flash does, so I’ve ported it to desktop PC as:

Yes, it’s a classic. 14 million players, 13 million shared contraptions and 70 thousand user-created levels over the last 12 years. It’s been used in schools and has inspired folks to become engineers and game developers. After its initial release in 2008, there was a mobile version (retired), a sequel, a spinoff (unreleased), a spiritual successor (also unreleased), another spiritual successor (Incredipede), and a 2016 VR evolution.

The game’s lesser-known Flash sequel was made in partnership with InXile Entertainment’s Flash wing Sparkworkz. You can still play a free version of it on Kongregate.com, though the online features are long since broken.

It features magnets, moving levels and challenge modes like green (no powered wheels) and clean (all pieces must end off the screen). It’s included as a bonus with Fantastic Contraption classic!

When I started the PC port, I was surprised to find the Fantastic Contraption community still active despite our near-total neglect.

The new discord server is hopping with friends sharing custom levels, organizing challenges, and modding the game. Their enthusiasm turned what was going to be a quick and dirty job into a more caring update, as they helped me add some new features and fix things that had been broken for a long time.

I’m thankful solutions are ranked since there were a million to choose from for this trailer.

Flash had a big impact on our lives and on the game industry, and though it’s been effectively dead for years, it’s still sad to see it officially go. Check out this excellent visual article by Jonas Richner for more about this important medium. 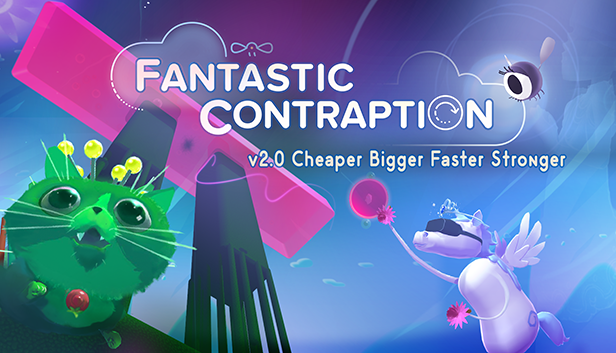 We’ve been working on this update for a year now, and we’re excited(/relieved) to finally get it into your hands. This version is packed with new content, new features, and a ton of back-end improvements, but first:

Pricing has always been something we’ve had to approach carefully. As we were a launch title for the first commercially-available VR, there was no data on what was appropriate or expected from consumers. Now that the market has settled down a bit, we think that $20 or so is fair for everyone and in line with expectations. And if you buy now, you’ll essentially have $10 you didn’t before! That’s like… a pizza! A… a small pizza, but a pizza! You’ll be losing free money if you don’t buy today!

We’ve put a ton of work into our puzzle-set and have created a whole new “B-Side” playlist for you to enjoy! The game now boasts over 100 levels, smoothing out the introductory learning curve and adding some high-end challenges for those Contraptionistas that find the late-game too easy. Share your new solutions! Show us what you’ve got!

We’ve been making separate versions of Fantastic Contraption for different platforms, as each new piece of hardware had different technical requirements or minimum specs. Gameplay is the same between all platforms if you have the latest and greatest hardware, but what if you don’t have a supercomputer with a dedicated AC room? We’ve put a bunch of probably-disqualifying performance-enhancing code into each edition of the game to make it sing uniquely for each platform.

What we’ve done in Version 2.0 is merge all of our performance fixes into one master build. This means that if you have a computer that is below min-spec on any platform, you should still be able to play without our physics engine grinding your CPU to dust! This also means that if your CPU is heavily loaded with other tasks (Twitch streaming, mixed-reality compositing, etc.) the game will keep chugging along at a comfortable 90+ FPS.

This required us to rework how physics work so if reality starts falling apart for you, maybe try RAMing some CPUs onto your DVD-ROMs.

Fantastic Contraption has been hitting up the gym every week and is really starting to show some progress! It’s been simultaneously doing low- and high-carb diets and the results are amazing!

But also, now that you’ve made it this far down in the update news, I’ve got a secret to let you in on. All those dirty article-skimmers won’t know about this, but those B-Sides levels? They also include a handful of levels featuring all-new gameplay mechanics: Cactuses (that destroy bits of your contraption on touch) and Balloons (that give your Contraption buoyancy to float over Cactuses, gaps, and other challenges).

These new elements aren’t a big part of this update; they’re little teasers we’ve thrown in, things that we’ve been working on since version 1.0, way back when VR was just a baby. They’re just two fun toys in a whole toolbox of things that were cut for the initial version of the game. You can access these new elements in the Level Editor though – so you can generate (and share online) all sorts of zany things for the world to see! 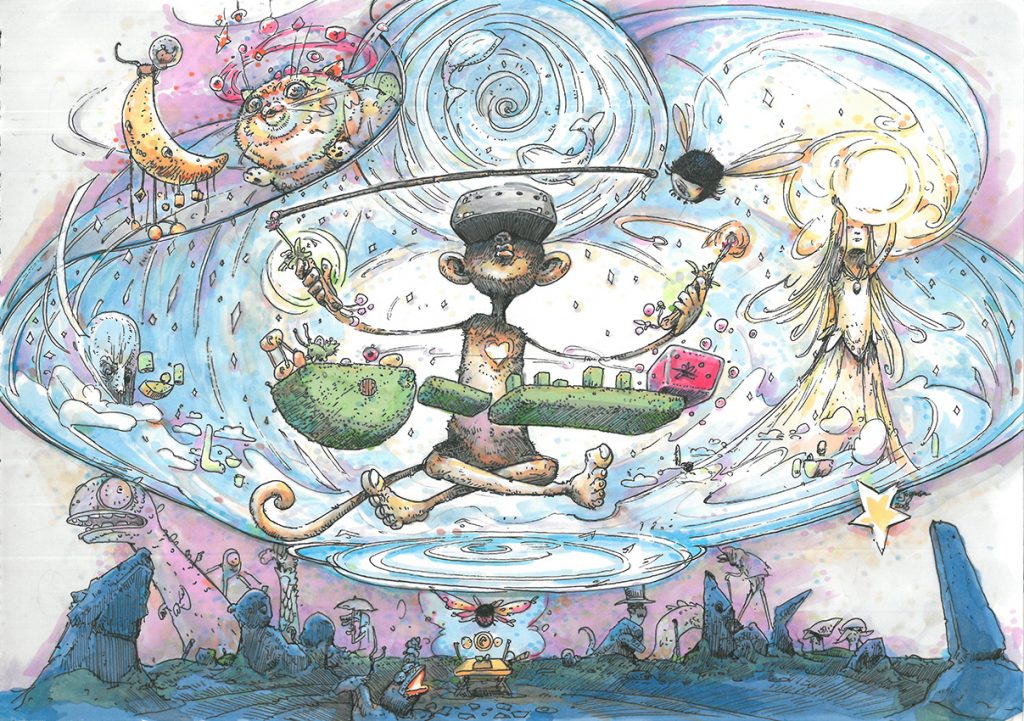 PS VR and Microsoft Store contraptionistas: You are also getting the 2.0 update! It’s all done on our end, we’re just waiting for their quality control inspectors to finish going over it all with a fine-toothed-magnifying-glass. That’s a thing, right?

Thanks to a ton of hard work at Radial Games, Fantastic Contraption will be coming to PS VR next week! Here’s the announcement (reposted from the Official Playstation Blog). Chris Floyd from Radial Games here, with an exciting message from our giant videogame zeppelin flying high overhead. We’ve been working day and night to create a most exquisite and whimsical virtual reality morsel: Fantastic Contraption for PlayStation VR! Sure, you could stand around, windmilling your arms in our magical virtual reality wonderland, but now you have the choice to sit back and play Fantastic Contraption right from your couch! Imagine! We redesigned the gameplay experience especially for PS VR, taking advantage of the likelihood that you have a favorite place to relax in front of your PlayStation 4. We’ve included special PS VR-only features that allow you to resize and position your gameworld at the press of a button, which we’re sure you’ll find slick and amazing.

It has fast become my favorite way to play, and makes contraption-building feel a whole lot like model-making, which we are Very Big Fans of here at Radial Games. We have a handful of brand-new, PlayStation-exclusive levels in the release. Try your hand bouncing around some moguls, attacking a big-bricked wall, and more! We’ve designed a few challenges specifically around seated play, and we know you’ll enjoy them.

Dynamically Resize the Entire World in the Brand-New Resize Island

Welcome to Resize Island, where you can dynamically resize the entire world around you! This opens a world of customization for your preferred way to play. You can make the world really huge to fit your standing-style gameplay preferences, or shrink it all the way down to fit on your lap, where you can marvel at tiny Neko. That’s right, THE CAT RESIZES TOO. You can do anything in videogames.

For those of you with a lovely new PS4 Pro, we’ve spiced up the game a bit extra for ya:

Let us know below what you’re most looking forward to, and I hope to see you having a great time with Fantastic Contraption when it launches next Tuesday!

Kimberly Voll is our resident VR expert - she’s spent her career so far studying player cognition and game design, and specializes in UX, AI and gameplay. She’s got a PhD in computer science, and an honours degree in cognitive science, and has worked on too many games to list, including ROCKETSROCKETSROCKETS. (She blogs at zanytomato.tumblr.com.)

Gordon McGladdery aka A Shell in the Pit is doing sound and music. He is a vocal binaural and VR audio enthusiast whose past projects include Rogue Legacy (Cellar Door Games), Invisible Inc. (Klei Entertainment) and is the composer for the Youtube Channel Smarter Every Day.

Sarah Northway is working on programming for Fantastic Contraption. She's best known for her popular Rebuild series which she wrote while traveling the world!

Andy Moore started his game development career doing Community Management and Design for the original Fantastic Contraption, and has since founded Radial Games -- responsible for ROCKETSROCKETSROCKETS, Monster Loves You!, and SteamBirds. He's also a licensed commercial pilot and will talk your ear off about airplanes. (He blogs at captain-andy.com.)

Plus all the awesome new folks who've joined the teams at Radial Games and A Shell in the Pit Audio!